SAT is hard, but there are algorithms that tend to do okay empirically. I recently learned about the Davis-Putnam-Logemann-Loveland (DPLL) procedure and rolled up a short Python implementation.

(I can’t get no) satisfaction

A boolean formula is called “satisfiable” if you can assign truth values to the underlying atoms in such a way that the entire formula comes out true. For example, the formula

to false. By contrast, the formula

The general problem – does a satisfying assignment exist for a given formula – is called boolean satisfiability (SAT). It turns out that solving SAT is equivalent to solving the restricted problem of 3SAT. This makes representation easier so I focused on that. The problem of 3SAT is the same, except that we only consider formulae in 3CNF (conjunctive normal form). That is, formulae that are conjunctions where every conjunct is a disjunction of three literals. For example, the formula

is in 3CNF; the formula

John Franco and John Martin have written extensively on the history of SAT, which goes as far back as Aristotle. The problem received attention from medieval, enlightenment, and early analytic philosophers. Modern computational approaches emerged in the middle of the last century. The DPLL procedure was published in 1962 (here’s the original paper). Its core ideas remain important ingredients in modern SAT solvers.

After a brief and irritating foray down the OOP path, I decided to use raw types to represent everything. My code uses the following conventions:

A literal is a tuple consisting of a name and a sign. E.g.

A disjunctive clause is a set of literals. E.g.

A CNF formula is a list of disjunctive clauses. E.g.

The simplest way to solve sat is to try everything. Given a single assignment (represented as a set of literals), we can determine if it satisfies the formula by testing whether it intersects with every conjunct. To test if the formula is satisfiable, we iterate over all assignments, testing each as we go.

The DPLL procedure is a recursive search algorithm. The base cases are those of an empty conjunct, which is true, and a conjunct containing an empty disjunct, which is false. (If you find the latter off-putting read this explanation). The recursion case then deals with a non-empty CNF formula that has no empty clauses. We pick an arbitrary literal and set it to true. This means that all conjuncts containing the literal drop out, and all conjuncts containing its negation have its negation removed. Then we recurse. If this doesn’t result in a satisfying assignment, we set the same literal to false and repeat the same procedure.

I used the following code to generate random 3CNF formulae:

I then compared the performance of the brute force approach and DPLL over various numbers of literals. Each scores is averaged over one hundred random formulae. 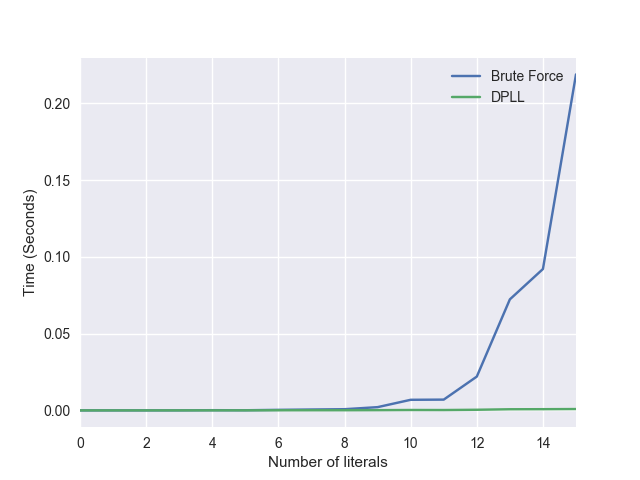 Full code can be found here.